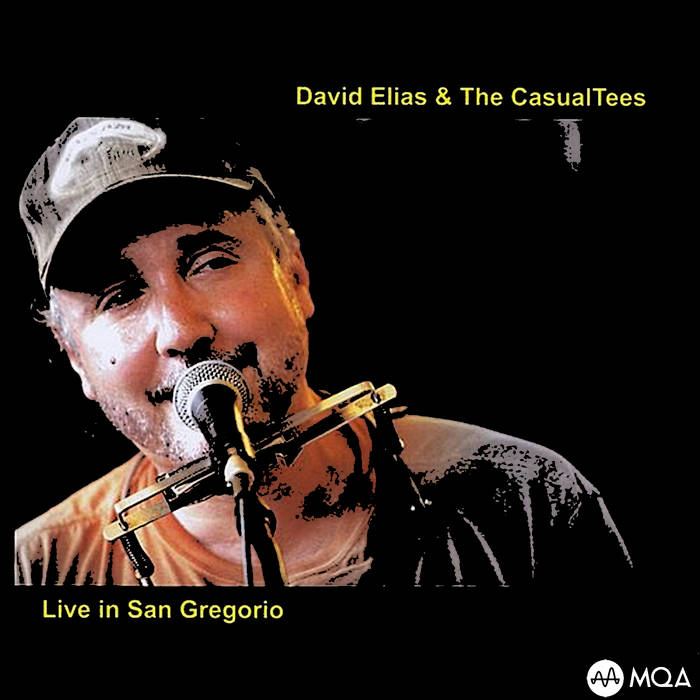 ~~~~~ About "Live in San Gregorio" ~~~~~~
.
NOTE: Recorded to 24-track DSD64, mixed/mastered as 24/96. Live large band playing in San G. off Hwy 1 south of San Francisco. You can download the original FLAC source masters from www.davidelias.com
.
Listen to the CasualTees Live in the General Store in San Gregorio -- home to many a wayfaring musician and reckless so-and-so... Performing for consecutive evenings in The Store, our 7-piece band were captured digitally by Gus Skinas on a Sonoma DSD workstation. You get to hear the whole story.

With the album download you also get the 3-camera video shot by Peter Buranzon and Dave Rhodes of the performance of "I'll Never Know Tomorrow".

This makes you wish you were there. Upbeat, lyrical, expressive, live...Turn it up.

Here's what Gary Rancourt wrote online at CDBaby about this album:

David's music always brings a sense of delight. It's music about nothing and everything at the same time. I know that sentence sounds completely contradictory but it's what I feel. He is able to take the simplest passing fragment of a scene - which maybe arrived fully formed in his head and maybe not - and weave a wonderfully poetic story of great complexity.

This work, performed live in an intimate venue that he knows so well, gives both a sense of intimacy and authenticity that imbues these tunes with charm and warmth. An added bonus is the sound is great - just the right amount of room sound to create and support the vibe in that venue. All of the musicians are first rate and I especially like the guitarist. Backup vocals also excel. This is feel good music and his good time becomes our good time. I felt welcome to the musical party.

In these days of psychological angst, David's music is an antidote. The common semantic thread with all these tunes is frankness, honesty and acceptance without regret - so often hard to come by in today's music."

This album is pleasure in music and sound.
Upbeat from the first, David Elias and eight other talented artists perform for us, and an appreciative local crowd, captured live over three nights at the historic San Gregorio General Store near Half Moon Bay in California. We get the feel of the place and its great acoustics, and of these fine performances. There is a flow to it all and it's obvious they're in the groove. For me, this is among the best experiences of live music -- sounds real; makes me smile. David is a pioneer of using the latest technology and talented engineers to produce great-sounding recordings. This is one of 'em. The sense of being there, the placement of instruments and voices, their definition, natural reverb. It's all there. And the interplay of fine musicians at these special moments in their lives is wonderfully presented. Treat yourself!"

All Songs Copyright by David Elias, All Rights Reserved, ASCAP