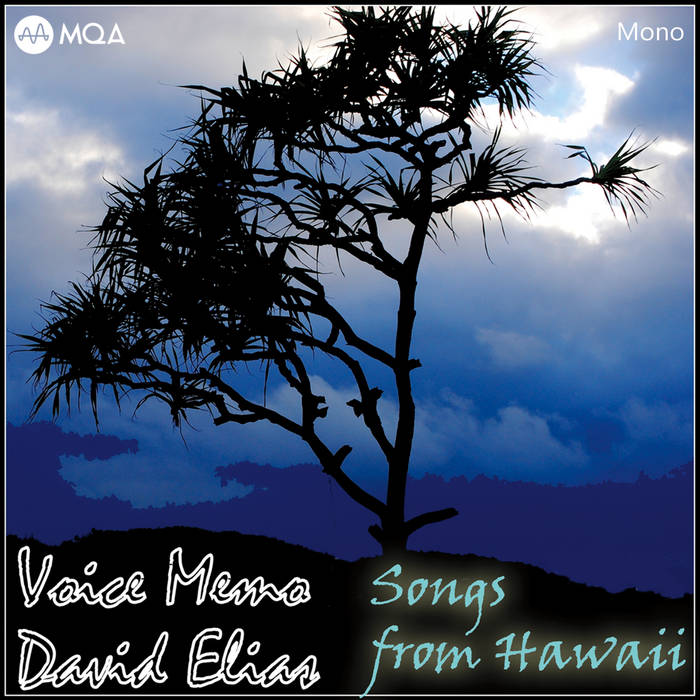 Maybe my songs connect to others, usually complete strangers because they are written by me, for me, but not about me. They have no objective or mission or point to make. They come out as music, words or both the way they come out. This album "Voice Memos" tries to show anyone that process for me.

Recorded directly to the iPhone using the iPhone mic (mono). The lossy AAC (48kHz) was upsampled by me to 32/44.1 and mastered as 16/44.1 CD Quality. Those masters were then encoded with MQA by MQA Ltd., UK. The result is a lossless CD quality master with MQA that can be played on anything at all as well as streamed.

The quality is further improved if played using a MQA DAC to decode and convert the PCM to analog. But it's not required and I feel it sounds better with MQA encoding than the original master did, even without the MQA DAC on playback.

A way to listen to the way my songs get created. I get asked this often enough. Dave, do you write the words first, or the music, or do you look up random things on Google and get ideas... ... ... ??

I can tell you there is no research in my songwriting. No Google, no references. Not even an idea of what I am going to write about 99.99% of the time. I am a tune player and creator on guitar. That's usually what I do when I pick up the guitar, play something new whatever comes out. It comes through me sitting there and I don't think about it much except trying to hear what it's saying. 99% of the time I play and play and play for awhile then forget it all.

But sometimes the tune is catchy to me and I work on it and keep trying to get it right and eventually it sounds like it has the right shape and notes and well, tune.

So I might start singing along with it at some point during that sitting and see if there's a singing part to go with the guitar part. No real words but then usually there are real words coming out of me, I didn't plan them.

So there's the idea for the song and I just write down the words as I come upon them and turn them into the melody and the song. That's how I remember the song - that and then I often turn on Voice Memo on the iPhone to record it at that point. Like I just discovered something I don't want to forget. Which is what I did.

Sometimes the tunes on guitar don't have any words. They are enough they way they are. Or words could come later. Or words I'd written down (poetry ok) another time can be randomly matched to a tune. That happens too.

Just trying to get it right...

Voice memos can help. Decided to try to share some of those in the honest fashion they were created sitting at home just playing for me.

Every song in this collection was recorded on my iPhone using a 3GS, 4, and 5S. All used the phone's mic (no external plugged in). I recorded the using the Voice Memo app that comes with the phone from iTunes.

These songs are then recorded in very low bit quality AAC by our friends at Apple who have a penchant for incredibly poor sound quality. They invented its use for retail in 2004 when iTunes came out. Before that MP3 downloads were free worldwide among millions of musicians and music lovers on forums and music sharing sites.

I'm all for putting music out there and Apple/iTunes has certainly done that in a digital way. But in the 21st century when technology spins over every 6 months and Apple themselves often at the head of that turnstile, don't you think they might owe the public a little better sound?

Having said all that, I have found over and over again that the little AM-radio sounding like speakers that Steve Jobs put in the iPhone have a remarkably natural kind of old transistor radio sound I've liked since I bought my first iPhone in 2007 when they came out and people lined up on the sidewalk in Silicon Valley to buy one (I waited 2 weeks and walked right in the store).

That iPhone AM-radio sound is how I started recording my Voice Memos. Just ideas often. A handy memo tool so I wouldn't forget some things I played for myself in a cabin here in Hawaii or maybe by the water or wherever. I learned how to sing and play "carefully" into the phone at good levels and good proximity for my ears. In the higher eschelons of audophiledom they call this approach to recording carefully for the highest sound quality "provenance" now. Ok Provenance. Just an iPhone though, nothing else.

I converted the AAC (m4a) files that are about 48kHz lossy (like MP3's lowest ranking) to a CD quality level (16/44.1 lossless FLAC) and "master them" as such. I don't mess with them otherwise. Just want them to be above board so to speak.

But then these voice memos were encoded with MQA by MQA Ltd., UK along with lots of other CD, HD and DXD quality masters I have as PCM. They sound better this way, even if you don't have an MQA decoder DAC such as the US$299 Meridian Explorer 2. Lots of MQA DAC models are for sale from other manufacturers at all price ranges up from there.

My memos are just that. Songs for myself to myself when I am writing them. I don't always know how they go when I am recording the memo. I can't always read the words I just wrote down perfectly or get the timing just right. They are rough and raw and new songs I just wrote. Before I even come to know them myself. I often want to record them and capture the original song for myself.

Now I want to share some of those with you. They are not the "best" ones per se. In fact they are just more of snapshots in time, where I was and what I was doing in Hawaii where I've lived since the beginning of 2008. But they are honest and they are all new songs for anyone who has listened to me recording since 1995. And I like how they sound.

Independent Acoustic has meaning to this end as it has for me since I started playing guitar at the ripe young age of 11.

Here's to all the independent artists all over. Fer Fock's Sake...

Pioneering MQA for hi-res with small files and streaming.